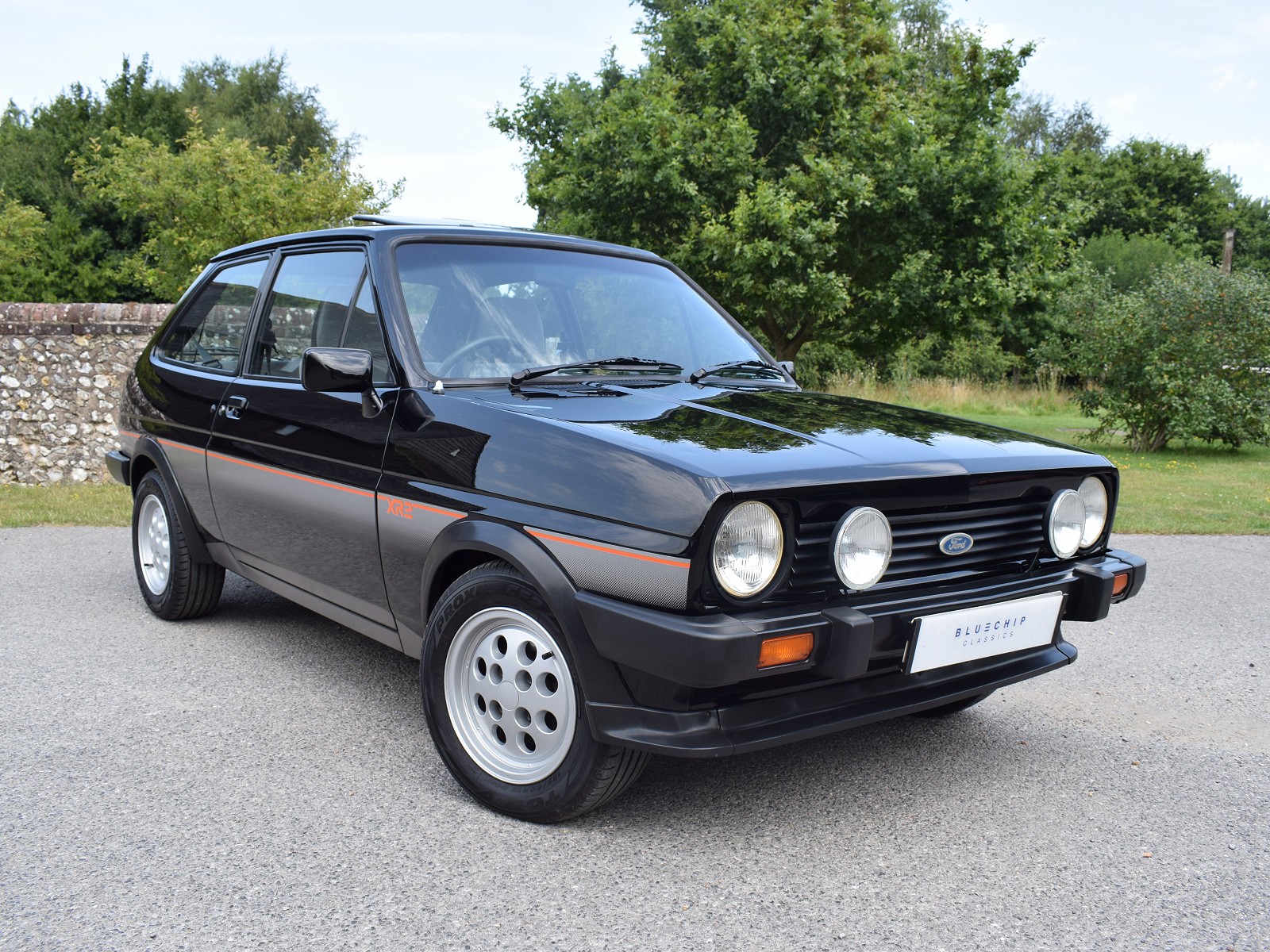 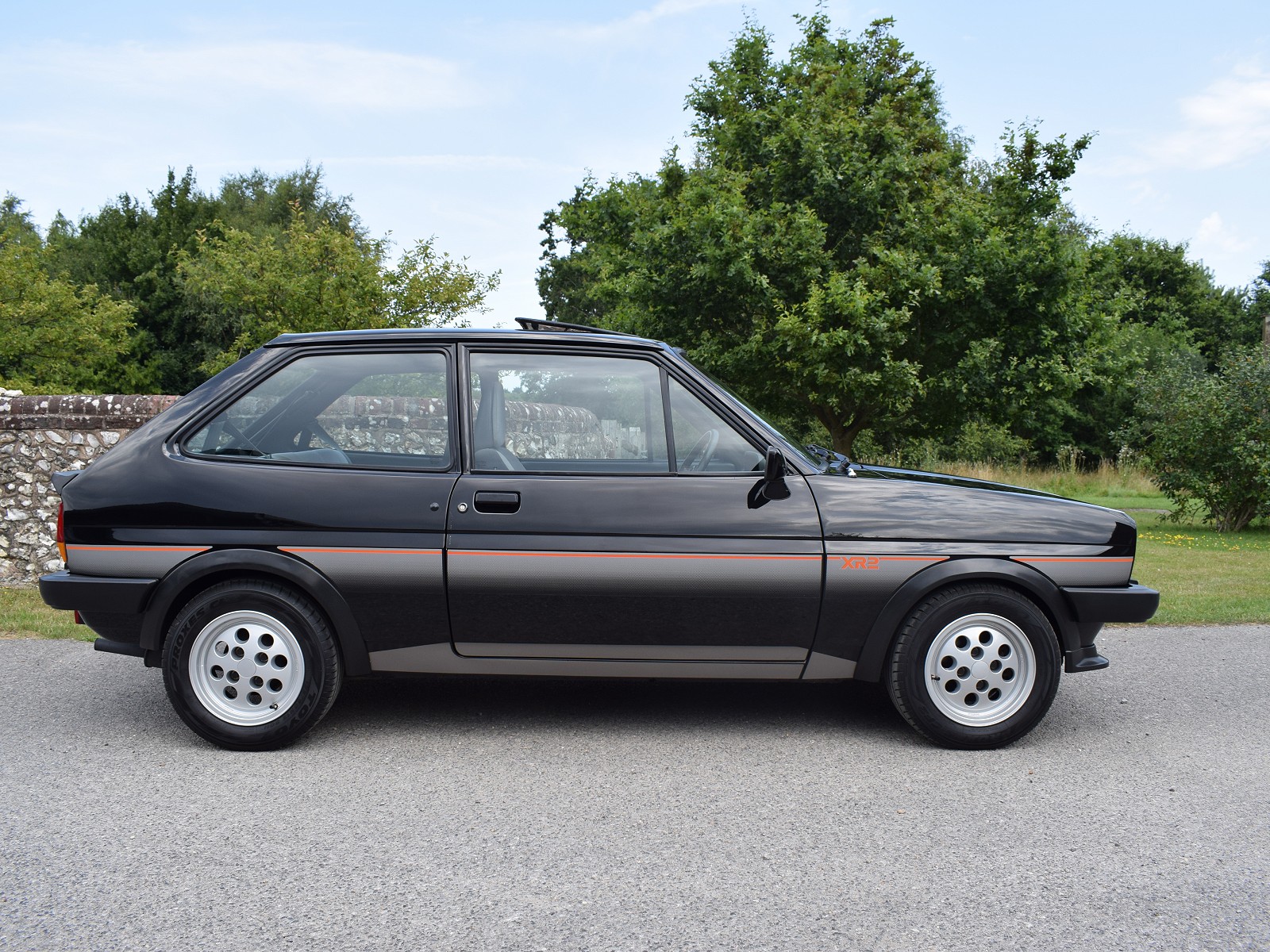 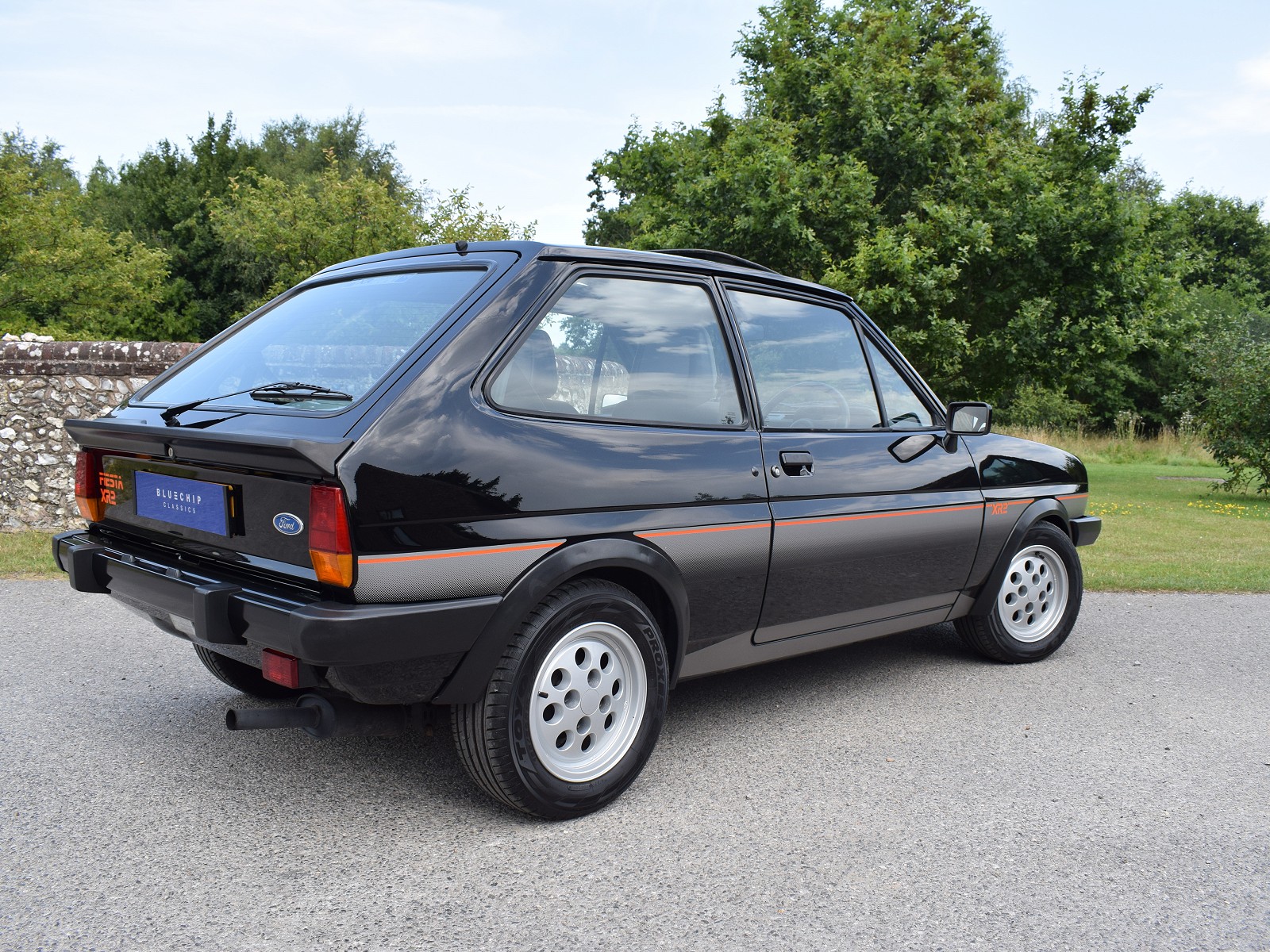 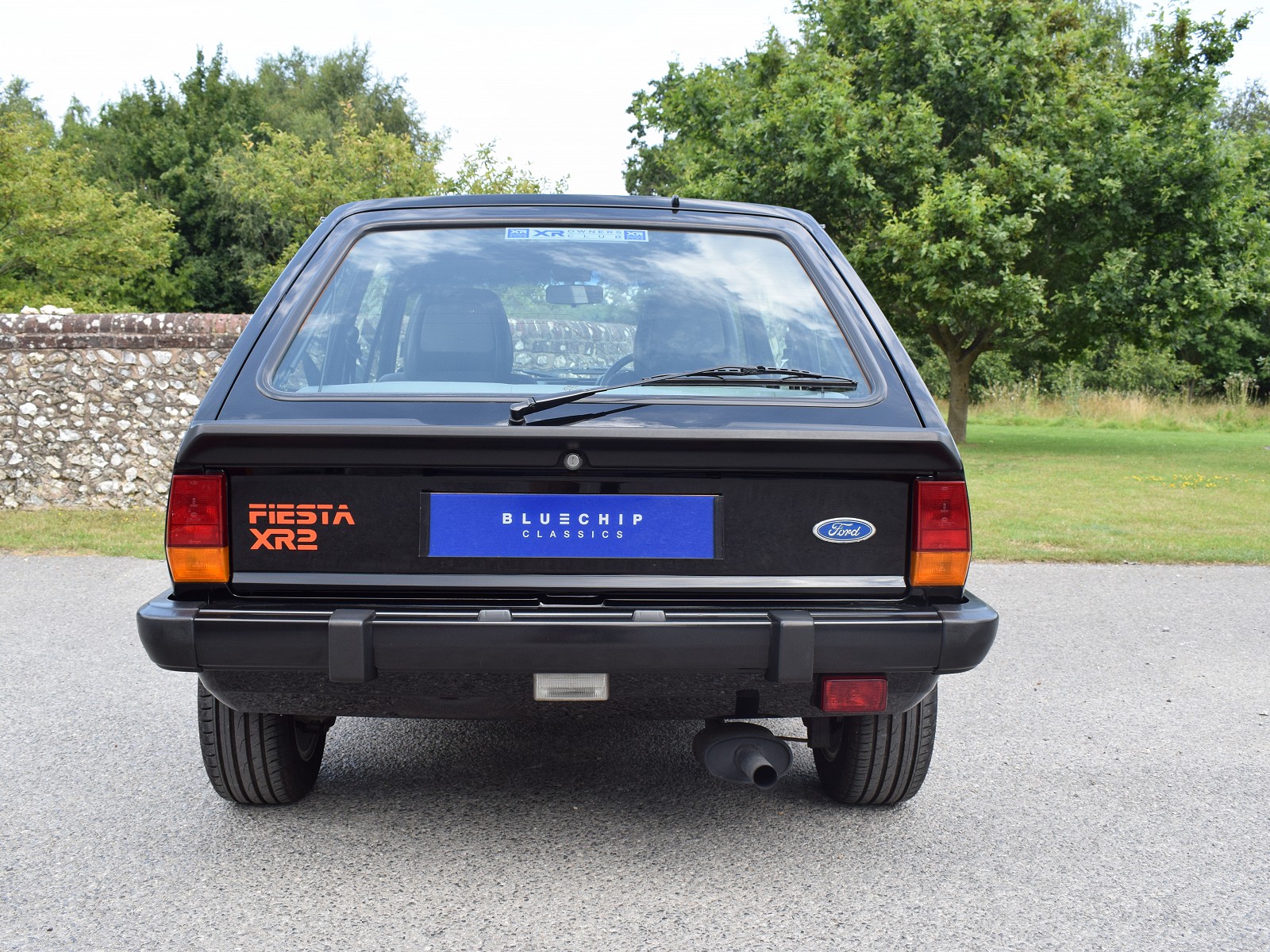 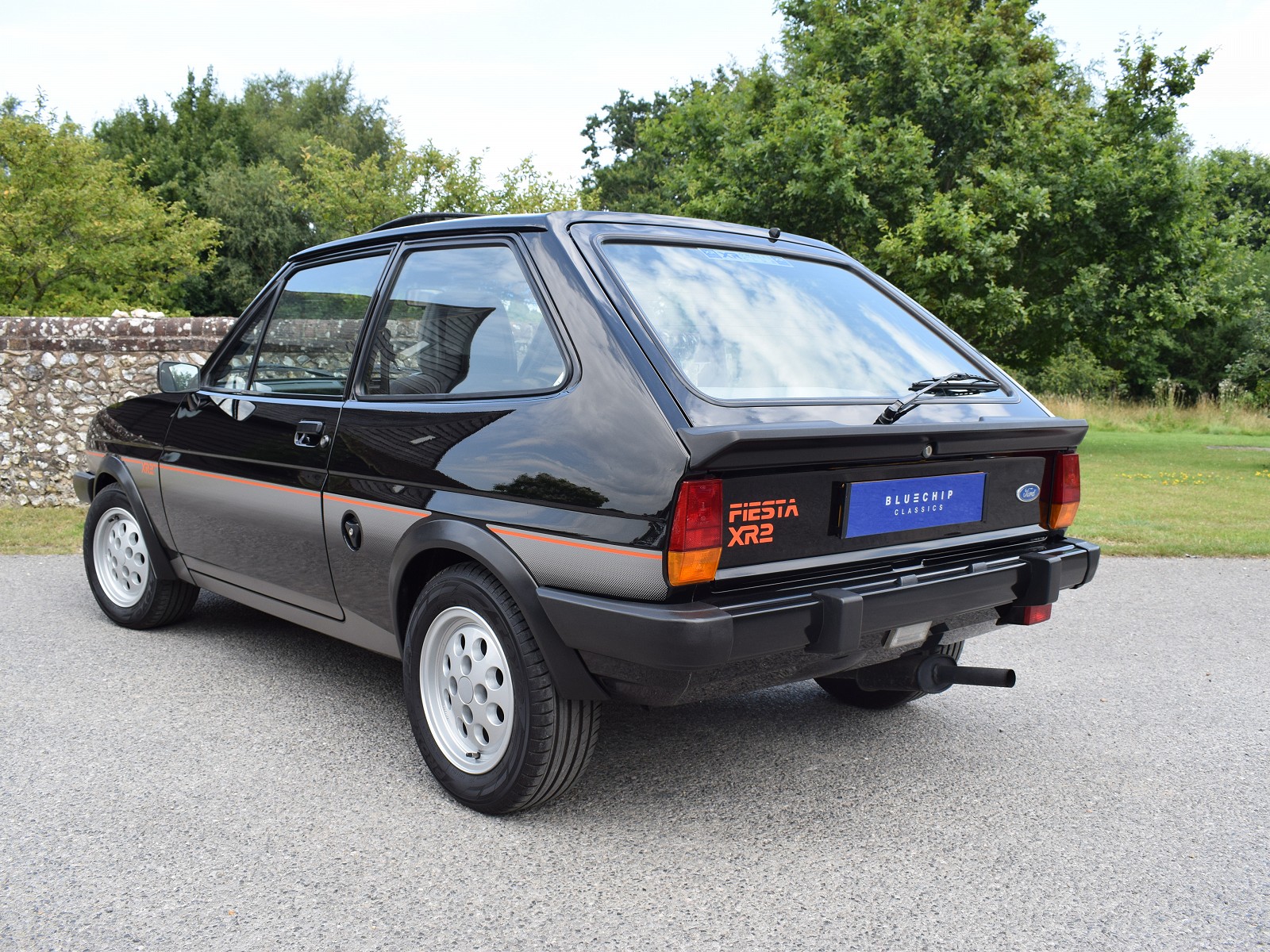 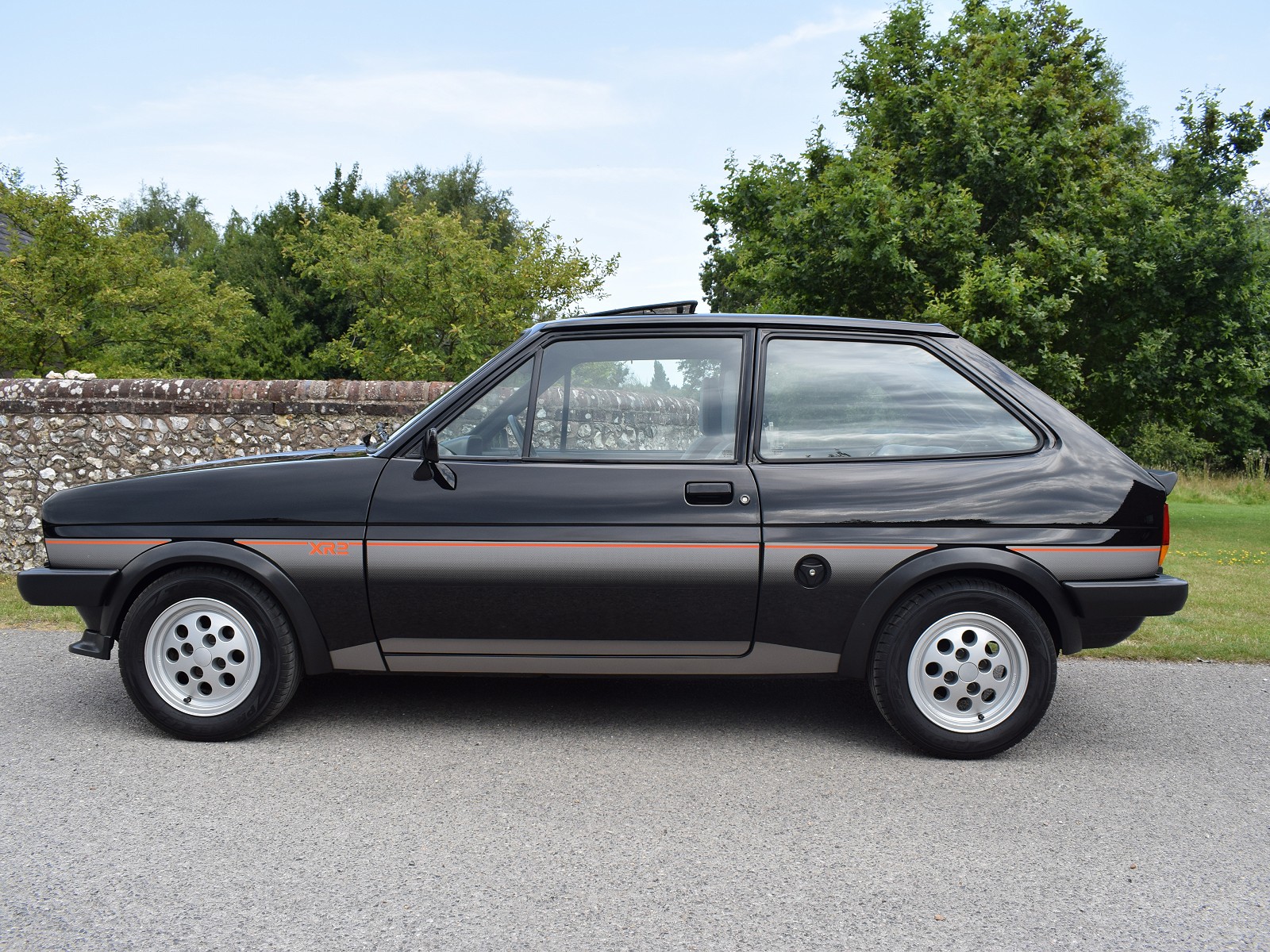 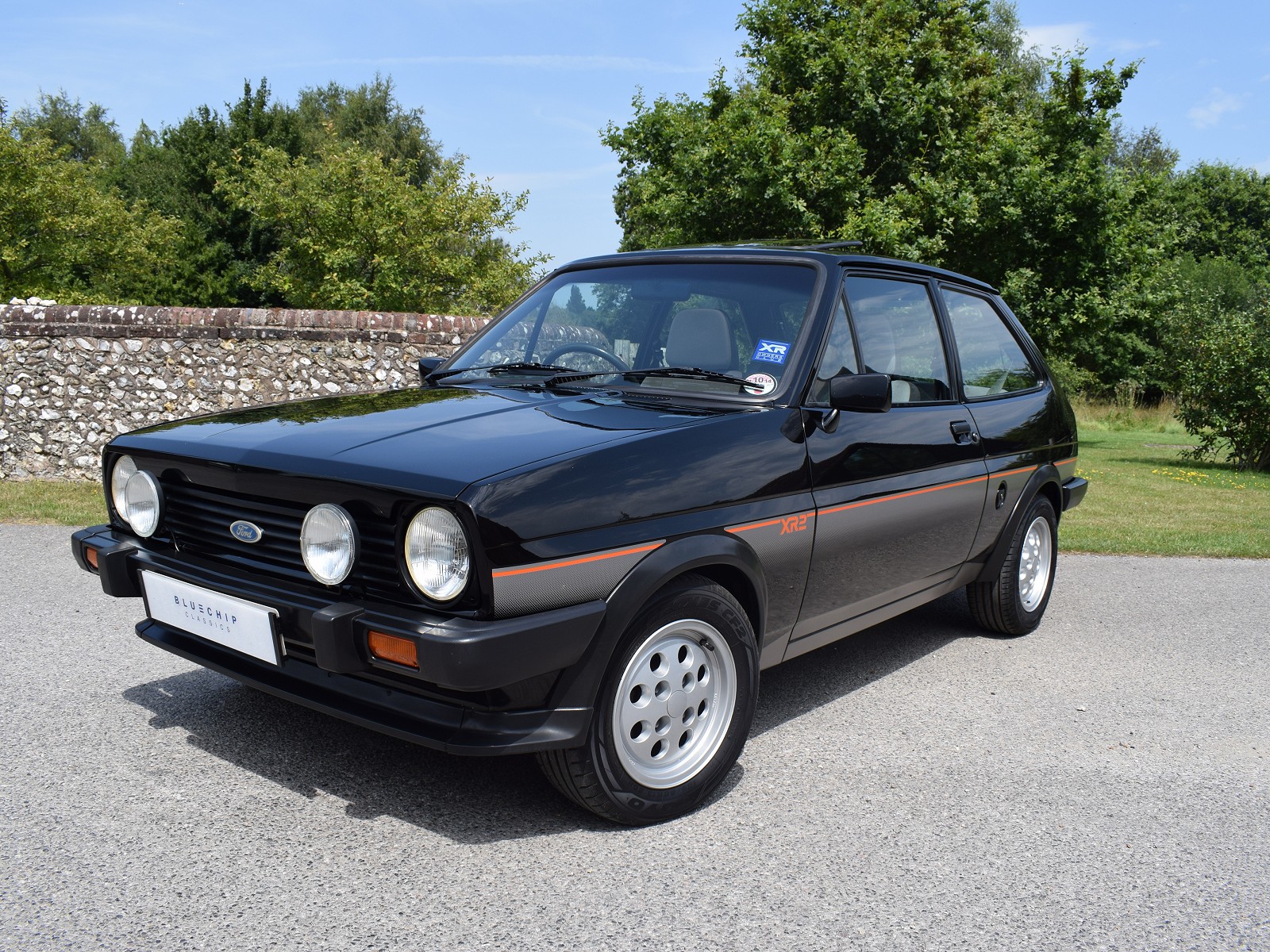 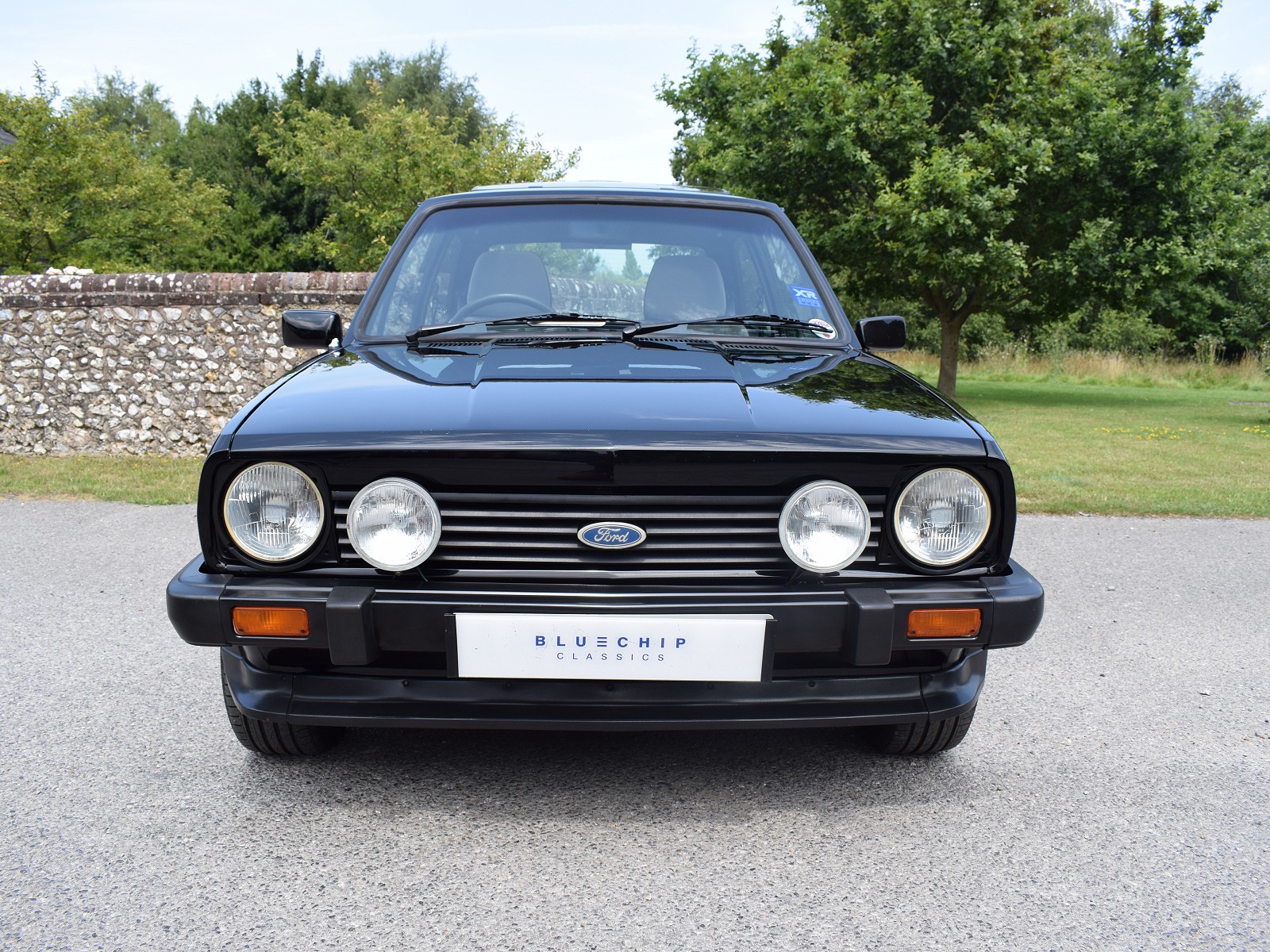 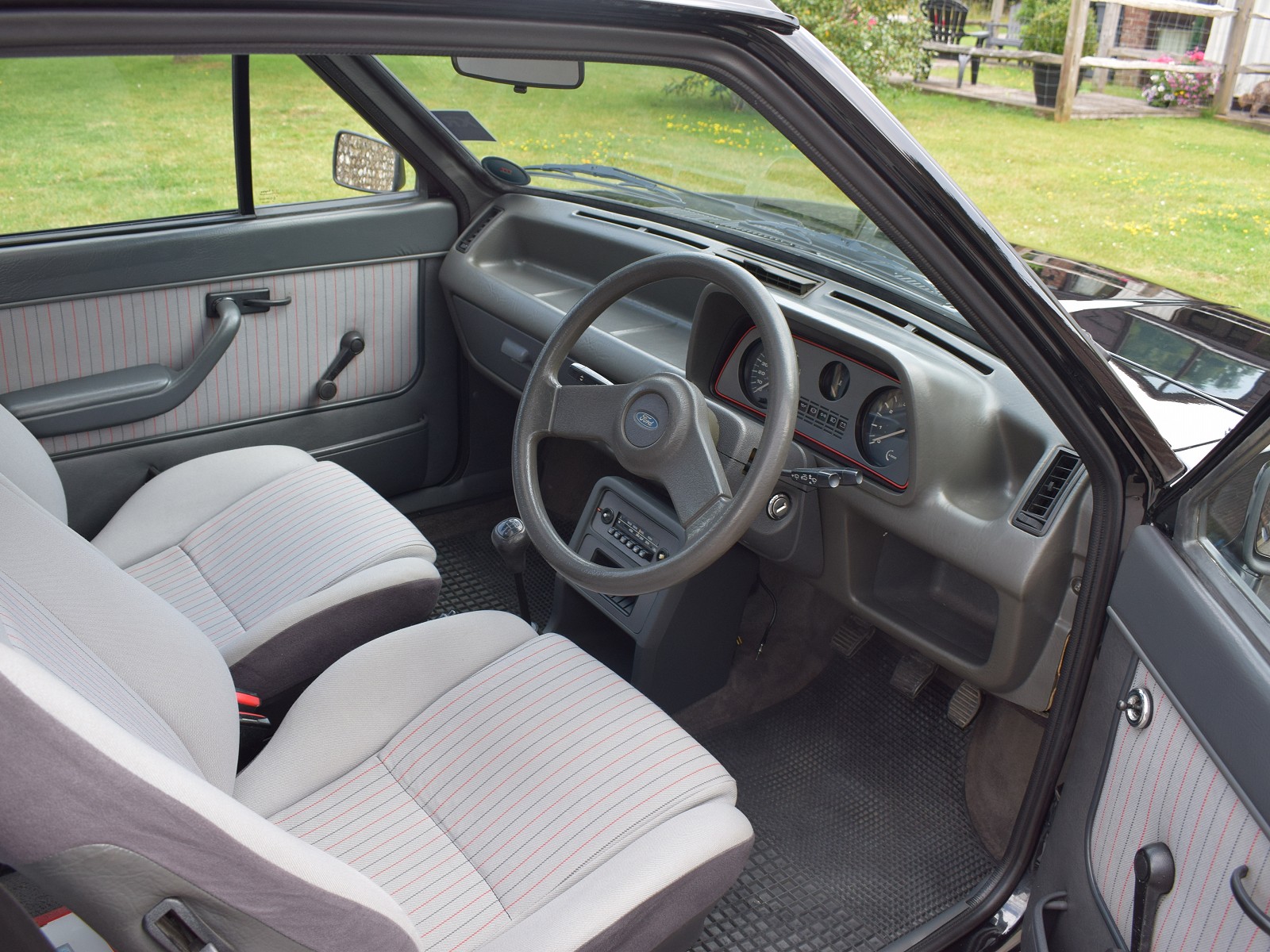 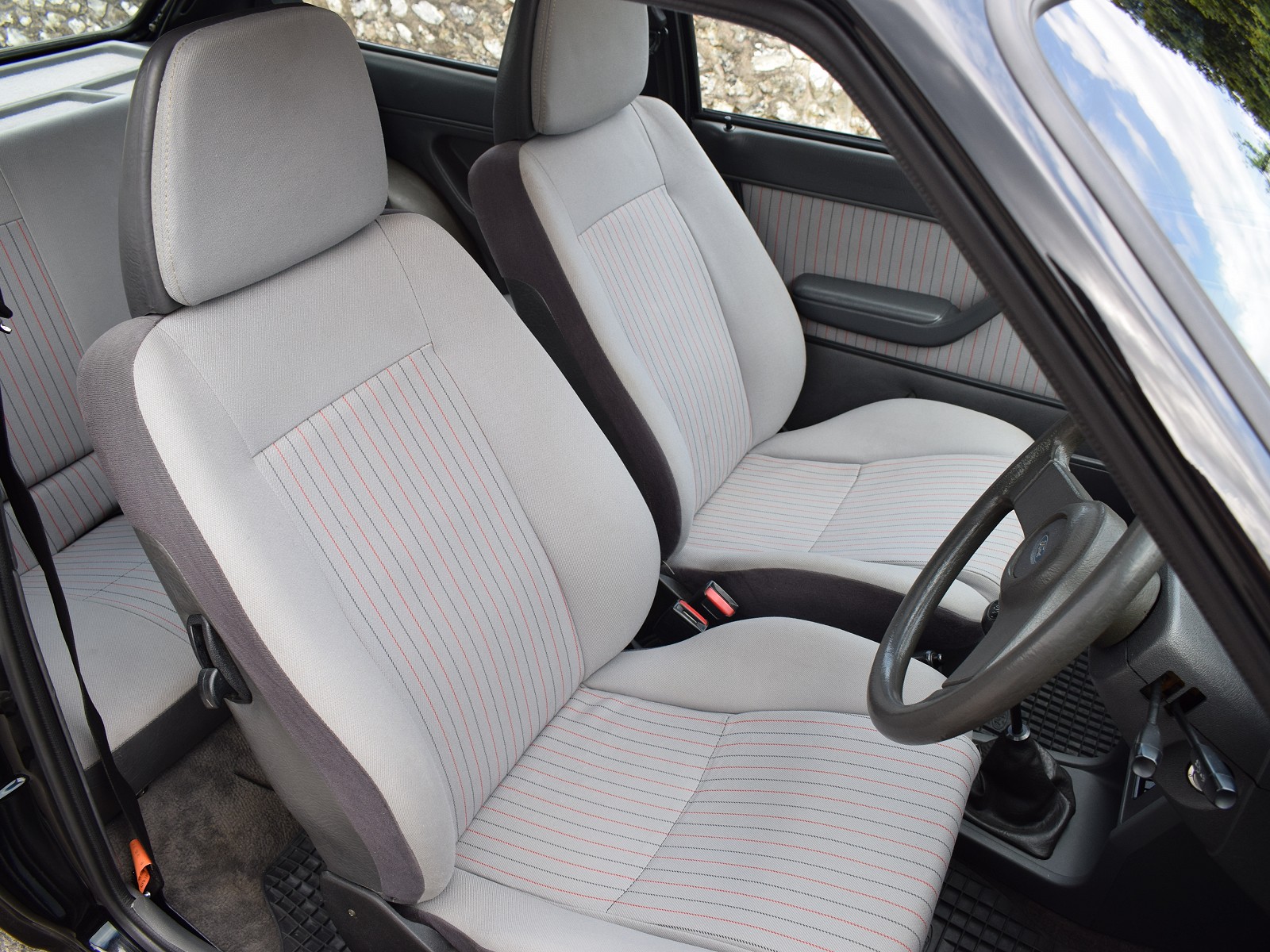 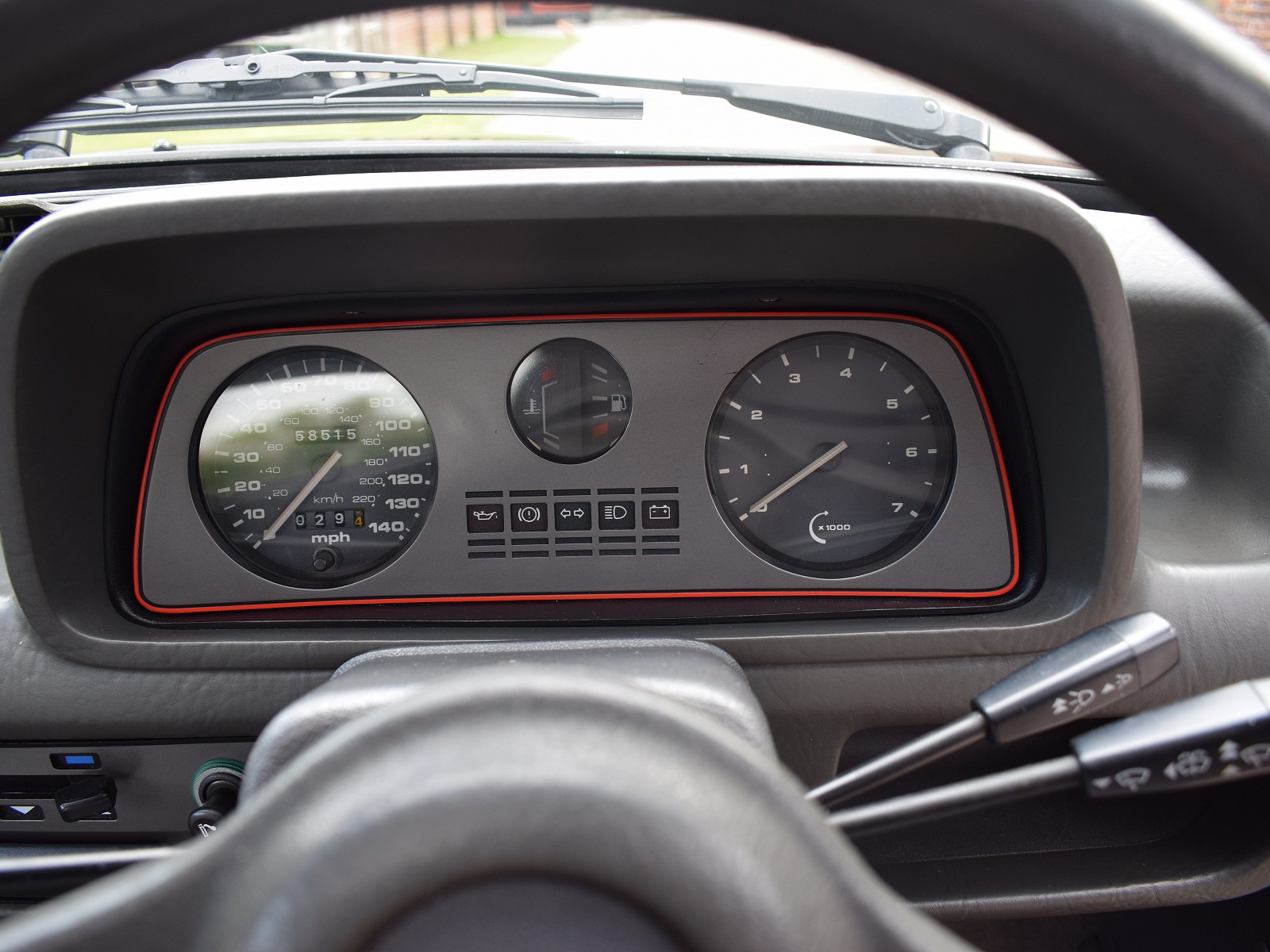 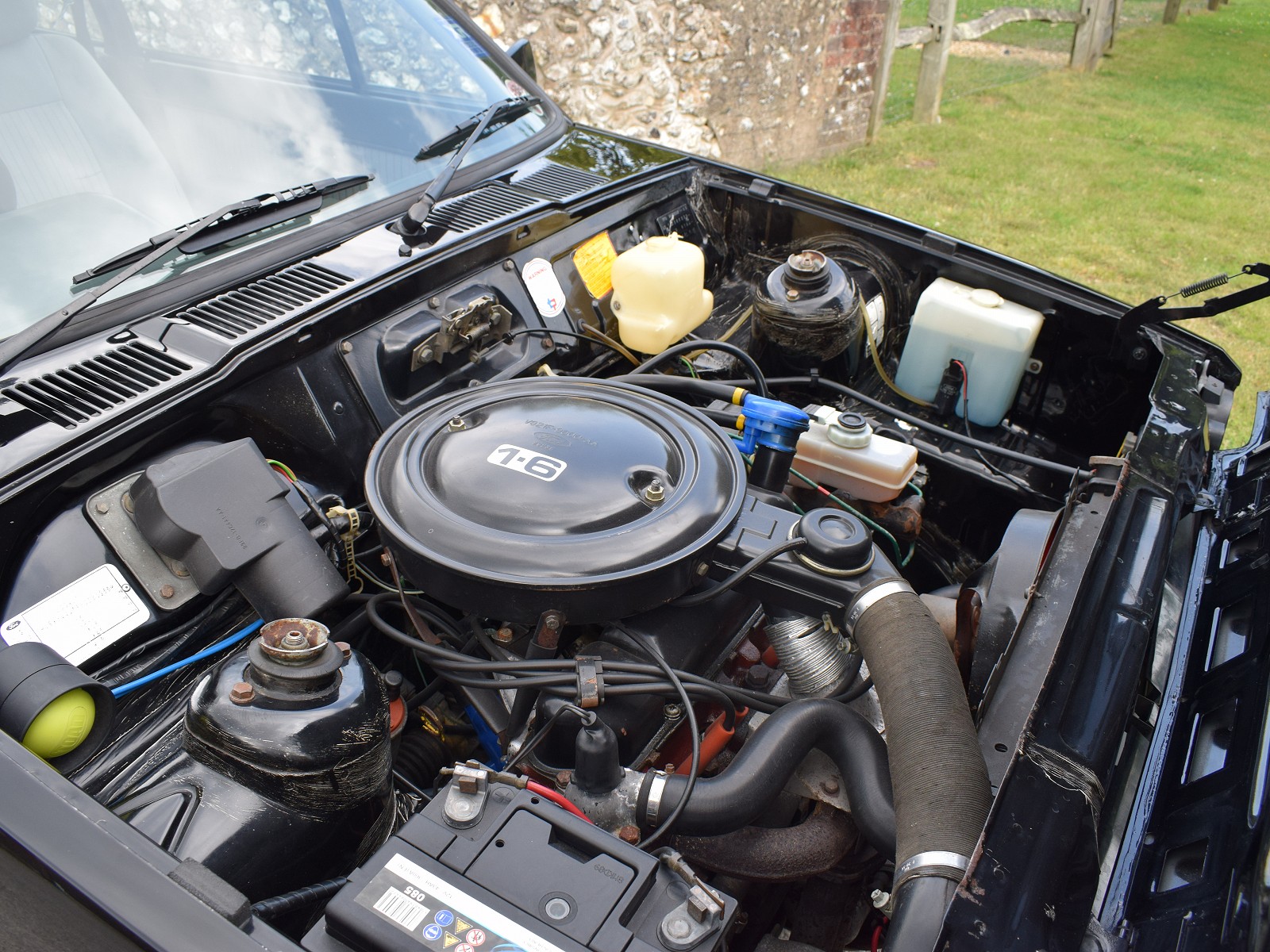 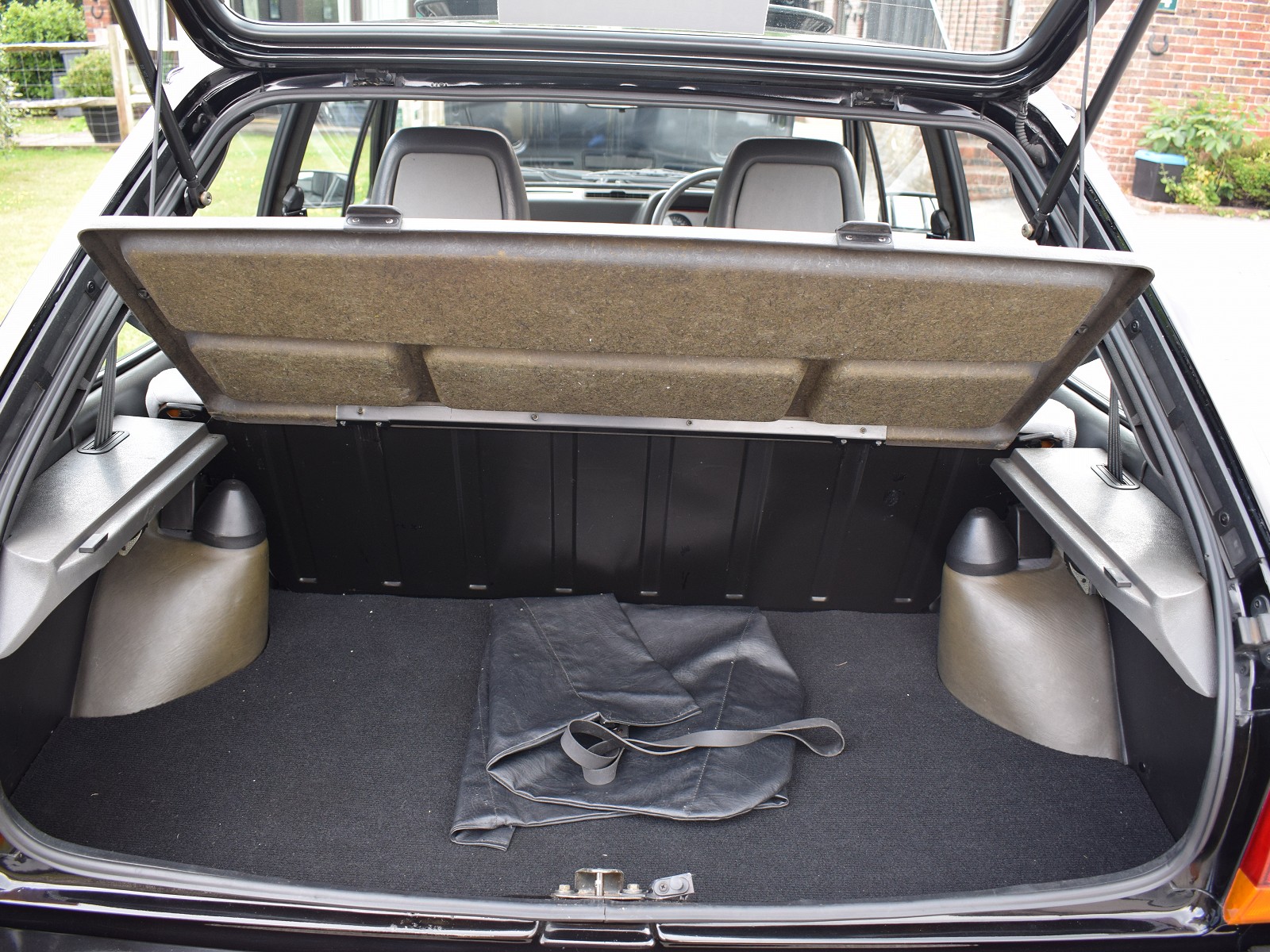 Overview
We are delighted to offer this low mileage Mk1 XR2 to the market.  Mk1’s are becoming incredibly thin on the ground and straight, unrestored examples like this even more so.   This is a late 1983 model, so one of the last ones, supplied with the 1.6 OHV Kent engine mated to a 4-speed gearbox.  Finished in optional Black with contrasting Grey sports trim with headrest infills, it is supplied with the following equipment:

The car was initially supplied by Ironbridge Garage in Southall to Mr. W in October 1983.   Mr.W opted to take out the optional ‘Extra Cover’ 3 year warranty for which we have the original booklet.  The original service booklet shows that Mr. W kept the car regularly serviced at Ironbridge until 1988 upon where we believe it went in to storage and was largely unused until it was sold to Mr H in Burgess Hill (2 miles from us now!).  Mr. H had the car serviced at Dinnages, and kept the car for a couple of years, passing it to Mr. S in nearby Crawley who kept the car for less than a year before it going to Mr. A, also of Crawley. In 2001, the car was bought by Mr C of London but rapidly sold again (probably a part time trader) to a Mr.O where the car returned to Sussex.  It is Mr O who can be credited with getting the car to former glory, investing time and money in gentle renovation and replacement of wearing parts with genuine Ford items.  The culmination of this was a 3rdplace awards at the Concours event at Ford Fair 2005, no mean feat for an unrestored car.  Mr O kept the car for 6 years, and after a 6 month spell with Mr. F, the car arrived at it’s last and longest owner, Mr S. who took ownership in 2007. Mr S. kept the car true to its original specification and cherished it for many years taking it to national and local shows.   Mr S. recently decided to reduce his fleet of 80’s hot hatches and as such the car arrived with us.

We are in possession of the original book pack, service book, operating manual, supplementary XR2 manual as well as an XR2 marketing brochure. We also have countless receipts, old MOTs, old V5s including a paid for service to track previous owners prior to Mr.O.  We have the original number plates, of which one is cracked so the car currently wears replicas.   All in all, a fantastic provenance which makes for fascinating reading and demonstrates the lengths owners have gone to keep this car going.

Mechanical Condition
The car starts up well after a short jab on the throttle to activate the automatic choke.  The Kent engine is surprisingly quiet with no rattles or knocks.  We have just fitted a new Borg & Beck clutch so moving off there are no issues and the gearchange is nice and light.  Quite surprisingly for an 80’s Ford, this XR2 is very quiet inside and devoid of the usual rattles and creaks usually experienced.  On the road, this car continues to surprise – it really drives very nicely and feels exceptionally tight for it’s age.   The car does not overheat in high ambient temperature and there are no leaks.   All in all, this car is in fantastic mechanical condition as verified by the recent MOT with no advisories.

Exterior Condition
First impressions upon approaching this car are ‘wow!’…  the black paint holds a deep lustre and all the bumpers and plastic trim are in outstanding condition.  Closer inspection will reveal factory stamps in the wings, original spot welds everywhere and intact factory seam sealer wherever you look.  Structurally the car is completely sound as well with no corrosion underneath.  The paint is largely original and as such, over the years has picked up some blemishes and has some DIY touched up areas.  Also, the paint is thin on some edges, which again points to the originality of the paint.  We thought long and hard about whether to address these areas and have decided that the decision on what to do (if anything!) with the paint is down to the new owner.  The car wears Toyo Proxes on it’s ‘everyday’ Pepperpot wheels, but supplied with the car are a set of freshly refurbished Pepperpot alloys shod with very good Pirelli P6 tyres which were original fitment for those wishing to show the car to its original specification.   Despite its show history, this is not a concours car but there is the potential there if that is the new owners’ choice, otherwise it could be enjoyed and displayed as a very smart original example for years to come without doing anything.

Interior Condition
The light grey seats are in excellent condition with none of the sag and stretch that you often see with 80’s fords.  All the plastics are in fine condition and the dash is uncracked. There is not much to go wrong in the car, but it all works.   Fitted is an original P21 radio in an uncut centre console (these were often cut to accommodate DIN fitment stereos) and the parcel shelf has been saved from having 6x9 holes cut in to them.  Also fitted are the heavy-duty rubber Ford mats which have protected the original grey carpet very well.   This really is a lovely condition interior, true to the specification it would have left the factory with.

Summary
This is a rare car indeed and will draw plenty of attention at shows and meets if that is the new owner’s intent.  It is steeped in originality although it would be disingenuous to say it is 100% original or that there aren’t any flaws – there are, but there is far more to like about this car than to dislike. We understand that prospective buyers may well require more information than is practical in an advert, so we are happy to supply that in the form of extra photos, videos or telephone conversations.   Finally, thank you for reading the advert thoroughly and please do not hesitate to contact us if you’ve further questions.